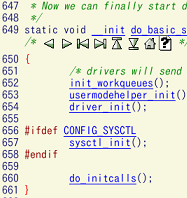 GNU Global is a software which makes your hack and review efficient by adding indexes to your software source code.

You can locate symbols in the source files and move there quickly. It is useful for hacking a large project containing many sub-directories, many #ifdef and many main() functions.

It is similar to ctags or etags but is different from them at the point of independence of any editor. You can use Global in various environments like emacs, vi, less and etc. You can read source code as a hypertext using any browser too.

GNU Global is Free Software based on GNU GPLv3 .

We planned an source code tagging system which meets the following requirement:

Though there are a lot of tools which support analysis of source code, most of them are designed as a integrated system and are not implemented to combine with other tools. As a result, if you select a certain tool then you must throw away other tools or alternately use them as separate tools which are mutually unrelated.
Then we decided that we should make a pure tagging system which can be called from diverse tools.

Applicable to a large-scale project

Though scale of software increases more day by day, most conventional tagging systems are made for comparatively small-scale projects.
Therefore we planned to make a tagging system which can quickly find symbols in a large-scale project, and can treat deep directory structure.

You can write a plug-in parser for new language. You can also use Exuberant Ctags as a parser for Global.

You can redistribute this software freely under the GNU GPLv3 (General Public License). Of course, all of operation and the function are no warranty.